When I think of nuclear power plants, clean, safe, efficient energy isn't usually the first thing to come to mind. Firstly, I think of Chernobyl, where the world's most devastating nuclear power plant disaster happened in the Ukraine. Deadly explosions released radioactive plumes that swept over Europe and ravaged a whole city unusable.

Secondly, I think of the 1979 film, The China Syndrome (hey, I'm a Michael Douglas fan). The movie depicts a coverup at the fictitious Ventana nuclear power plant that nearly creates a catastrophic meltdown of the nuclear reactor due to a loss of coolant exposing the fuel rod assemblies.

And now, thanks to the 9.0-magnitude earthquake and subsequent tsunami that left Japan in shambles, I will always think of the Fukushima Daiichi plant in Okuma. With fires and explosions threatening the nuclear reactors, fears that a meltdown could leak dangerous amounts of nuclear radiation were high and present in everyone—even in North America, where Americans are stocking up on potassium iodide tablets in fear of radiation reaching the U.S causing potential radiation sickness. But is there really anything to worry about? 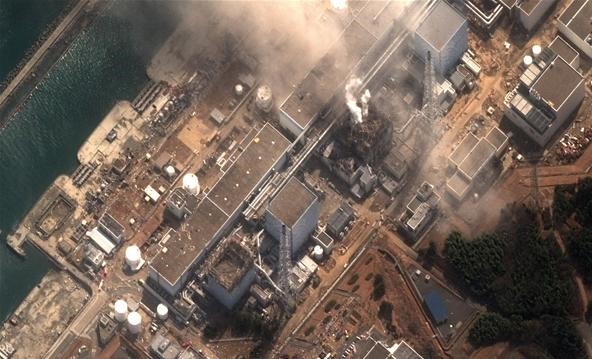 Joe Cirincione told Fox News that "The worst case scenario is that the fuel rods fuse together, the temperatures get so hot that they melt together in a radioactive molten mass that bursts through the containment mechanisms and is exposed to the outside. So they spew radioactivity in the ground, into the air, into the water. Some of the radioactivity could carry in the atmosphere to the West Coast of the United States."

This is because the Fukushima plant contains a different, safer reactor than Chernobyl's graphite-moderated reactor and the Ventana's sodium-cooled reactor (based off the old experimental reactor in the Santa Susana Field Laboratory in the Simi Valley). The Fukushima plant houses boiling water reactors instead, with neutron moderators—it uses boiling water to cool the reactor.

Right now, there's no need for panic, because radiation levels are currently falling at Fukushima, where workers are finally getting the plant under control. But that doesn't mean you shouldn't be prepared in case this situation worsens—or for when the next nuclear disaster happens. There's not much you can do to completely remove radiation from your person, but there are some things that can help lessen the risk of life-threatening radiation sickness.

Most people are already attune to this step. As I stated before, Americans are stocking up on Potassium Iodide caplets as we speak (um... as you read), which acts as a blocking agent.

In humans, the thyroid gland is prone to absorbing radioactive iodine. But when Potassium Iodide (KI) is taken orally, it saturates the thyroid with non-radioactive iodine, reducing the amount of radiation the thyroid will take in. But this is not a foolproof plan for prevention—it does not stop other organs in your body from being exposed or contaminated with radiation.

So, if you have a good stock of Potassium Iodide tablets, then you're a step ahead of everyone else, though taking KI irresponsibly could have adverse health reactions. In some people, taking KI where there is no radiation can actually damage the thyroid gland. It's advised that you don't take any until elevated radiation levels hit your area.

But interestingly, a report commissioned by Congress in 2003 recommended that everyone under the age of 40, located near a nuclear power plant, should have these pills on hand. And this is despite recent efforts from the CDC and DHSC preventing Americans from obtaining Potassium Iodide; Pharmacists are refusing to sell and Amazon.com is currently sold out.

It may seem obvious, but time is the most important step to thwarting deadly health consequences from radiation exposure. The longer a human is exposed to radiation, the larger the hazardous dose, the more harm it will cause.

So, get away from the potential radiation source as soon as you can.

When conducting relief efforts in Japan, U.S. helicopter crew members showed low levels of radioactivity. Even low levels could cause potential health risks in the long run. Cancers from radiation poisoning can take as long as 10 years to show up.

But after some quick reaction protocols, no further contamination was detected on the crew members. What did they do? Scrub.

When shortly exposed to radiation, it's possible that you only sustained external contamination, not internal. And the best way to make sure it stays that way is to:

That's it. When it comes to being exposed to radiation, you should always, 1). get the hell out of there, and 2). decontaminate yourself.

Now that you've evacuated yourself from the infected area and cleaned up a bit, it's time for the third step—increasing your distance to the infected zone. If you double the distance between you and the danger zone, the possible exposure of radiation is reduced by a factor of 4 (inverse-square law).

With winds pushing radiation clouds around, it could become a game of cat and mouse, where you're constantly on the run as it chases you around.

The next logical step is to shield yourself from radiation, which will help lessen exposure. Shelters are the obvious choice, but even clothes can help reduce the amount of exposure. Things like paper and normal clothing can prevent alpha particles from penetration obstructions. Heavier clothing is necessary to prevent beta particles from penetrating. But gamma rays possess immense energy, and you would need lead shielding to stop them. So, a shelter with lead covering is best.

See Step 7 below for a guide on proper shelters.

If you've been exposed to internal contamination of radioactive particles, you must take medication to try and flush it out.

For a full list of medication used to treat and manage internal contamination of radiation poisoning, check out "Managing Internal Contamination" from the Radiation Emergency Medical Management (REMM) website from the U.S. Department of Health & Human Services.

Step 7 More Ways to Reduce the Risk of Contamination

If you can't get a hold of Potassium Iodide tablets (Step 1), there are other simple techniques to be aware of to prevent or reduce thyroid damage. The Nuclear War Survival Skills (NWSS) by Cresson Kearny gives the following tips for accidents or nuclear war.

Other worthwhile deals to check out: